Sometimes you just need something to draw. You may require a good reference car picture to draw from. You've come the the right place. At a recent car show I snapped these photos of some of the hottest cars ever made. Mustangs, Corvettes, Shelby Cobras, and many more awesome cars were all lined up and ready for their photos. I also threw in a couple extra VW bugs because I have a soft spot for Bugs. My first car was a 69 VW Beetle and I loved that car even though I had to push start it each morning in the winter.
I learned how to draw a VW early on because I wanted to plan out different ways to customize the bug. I have a 74 Super beetle sitting in the garage that needs some tender love and care.

Classic Corvette Pictures to Draw
This classic Corvette convertible in Black and White comes form the early 60's. I;m not sure what year it is exactly, but it sure is pretty. If you know the year, feel free to leave a comment at bottom of the page. Note: It says 1911 on the tag. I know it's not from 1911.

Volkswagen Beetle Picture to Draw
I found this 1971 Volkswagen Beetle convertible for sale at gas station on my way to work. I think the beetle is an easy car to draw because it is simple. The beetle is one of the popular cars ever made. Over 21 million were manufactured from 1938 until 2003.

Chevy Camaro Picture to Draw
I believe this first generation Chevrolet Camaro is a 67. It has custom wheels that are not original to the car. This car has one of the hottest red paint jobs I have ever seen. The Camaro has gone through 5 major generations of styling since it went on sale in September of 1966.

This awesome Cadillac is from the late 40's or very early 50's. If you know what year it is, please leave a comment below. In any case it is a really cool car to draw with tons of chrome, white-wall tires and a dazzling blue paint job.

Challenger Pictures to Draw
This 3rd Generation Dodge Challenger RT is one of toughest of the modern muscle cars on the road today.

Mustang Pictures to Draw
When I came across this Mustang GT 350 my heart started to beat faster. Designated the Shelby GT 350, it was produced by Ford in 1965 and 1966. All 1965's were white according to online sources, so this is most likely a 1966. The Shelby GT 350 was basically a street-legal race car, and it looks fast.

Thunderbird Pictures to Draw
This second generation Ford Thunderbird hails from 1958-1960. In 1958 the Thunderbird was redesigned as a four-seater to open up the potential for more sales which paid off as each year outsold the previous year and the car won Motor Trend "Car of the Year" honors in 1958.

Porsche Pictures to Draw
Imagine driving this black Porshe Carrara S down the autoban at an extremely unreasonable speed! Porsche has been refining the sports car since the early 1950's and I would be hard presses to choose a favorite. 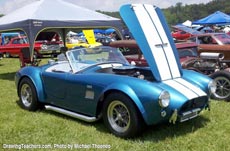 VW Beetle Pictures to Draw
An awesome looking beetle with a rag-top sunroof.

Buicks to Draw
A beautiful early Buick to draw. 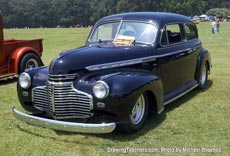 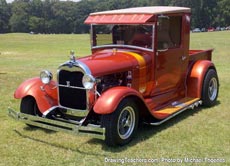 Hot Rods to Draw
Al l can saw is wow, this little Ford truck looks like a fun car to drive.

Thanks for Checking out these "Cool Car Pictures to Draw!"

Wikipedia on the history of automobiles

Return from Car Pictures to Draw to How to Draw