How to Draw an American Flag

Learn how to sketch and color an American flag in a few simple steps.

Perhaps the most recognized symbol of the United States of America is the American Flag. When attempting to draw the american flag you must be observant and ask your self, "What does the american flag look like?"

Question 2 : How many stars does the american flag have? Answer: There are 50 stars on the American flag since Hawaii became a state in 1960. Each star represents a state in the union and therefore the part of the flag with the stars is called "The Union."

Question 3: What is the relationship or proportion of these stars and stripes? Answer: read on to find out!

For this lesson you will need a pencil for sketching and an eraser for cleaning up your lines. Oh yeah, and a piece of paper would be most useful too! You can use a felt tip pen, ballpoint pen or marker for inking in the star's outline.

American Flag Drawing Tutorial Step 1:
The American flag has thirteen stripes. I found that a handy way to learn how to draw the American flag is to start with the stripes rather than to draw a box and try to divide it up. To draw the stripes, you will need to sketch out 14 lines spaced roughly the same distance apart. (If you want to be more accurate, you can use a ruler to draw the lines and measure the spacing.) 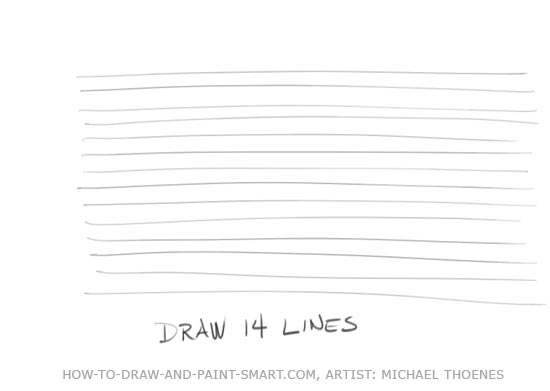 American Flag Drawing Tutorial Step 2:
The "Union" portion of the American flag is seven stripes tall. So, count off seven stripes and draw a rectangle. 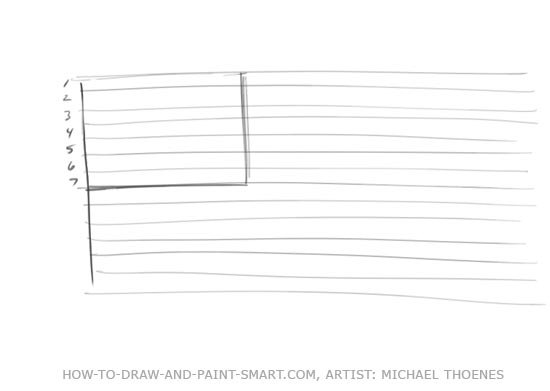 American Flag Drawing Tutorial Step 3:
The official length to length to heigth ratio of the American Flag is 1.9, with the union portion being as wide as 2/5 of its length, also called the "fly." Most flags sold to the public are not this long. Flags are commonly sold in sizes such as 4' x 6' or 3' x 5'.

Since the length to height ratio of the flag varies, you have some freedom as to where to trim it off. The drawing below is roughly the 1.9 ratio. I have shaded in the stripes to help place the stars. Note that the top and bottom stripes are shaded. The shaded stripes will be colored red in a later step. 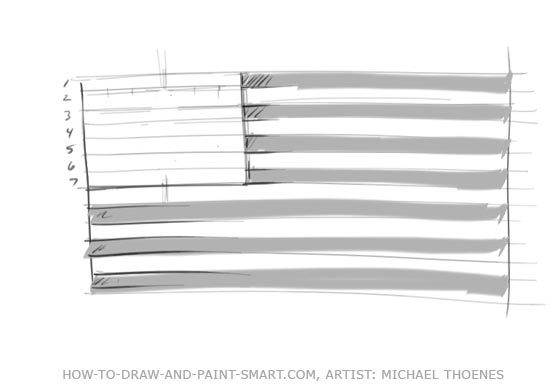 American Flag Drawing Tutorial Step 4:
It can be tricky to draw 50 stars on a flag. Fortunately they are in a pattern that can be easily reproduced. There are 11 columns of stars alternating 6 stars high and 5 stars high. To begin drawing the stars, I am using a small upside down "V" shape. You need 5 columns and 4 rows. for this group of stars. You can use the stripes as your guide for the rows. The top and bottom rows of these stars fall roughly at the edges of the white stripes. You may want to take a peek at the next step to be sure to leave enough room for the next grouping of 30 stars. 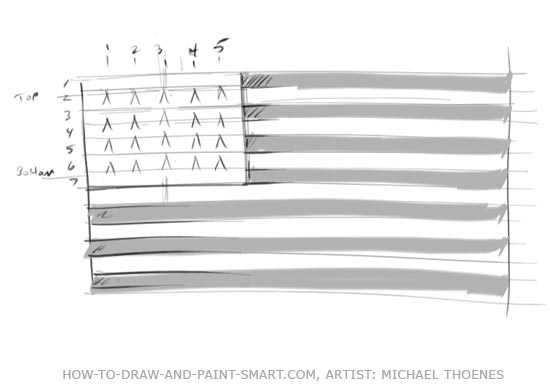 American Flag Drawing Tutorial Step 5:
Now add 6 columns of 5 stars high beginning on the outside of the previous set of stars. 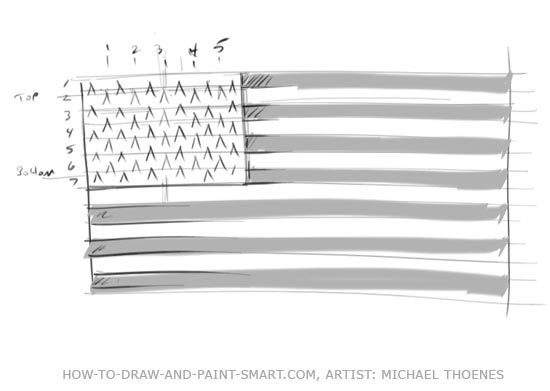 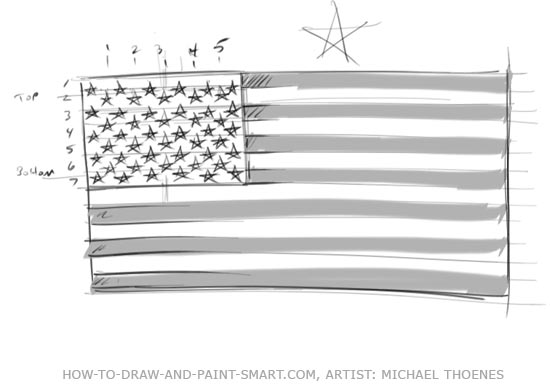 American Flag Drawing Tutorial Step 7:
Finally, erase your guide lines, refine your drawing and color your American Flag graphic with crayon or marker. Nice Job! You have created a fine piece of American Flag Clipart. Betsy Ross would be proud! 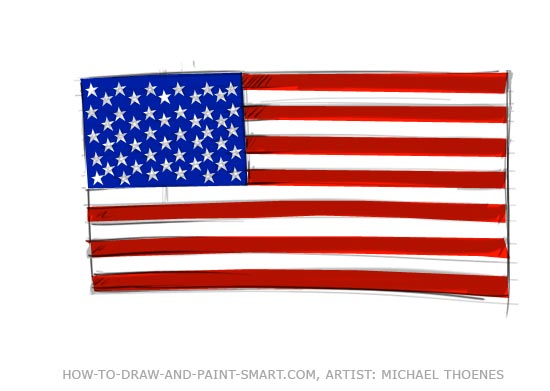 American Flag Graphics of the United States Flag over the years.

Back to How to Draw and Paint Smart Home