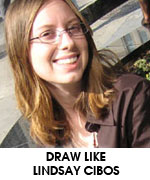 Don't give up if your first drawings aren't perfect. Art is not something that can be learned overnight. Keep a sketchbook, and take it with you everywhere. Look around you, draw what you see. Visit the zoo and sketch animals. Sketch people at the mall. The more you draw, the better you'll get. Good luck! _~ Lindsay

I've always had a love for art, and have been drawing from the time I was able to hold a crayon. Growing up, I enjoyed painting realistic renditions of animals, as well as drawing my favorite cartoon characters. I was a huge fan of animated Disney movies, and wanted to be an animator before I discovered and fell in love with the medium of comics.

My drawing and coloring skills are mostly self-taught through observation, dedication, and a lot of practice. In school, I took as many drawing and painting classes as possible. I've also taken a participated in a few community life drawing, cartooning, and animation classes

Lindsay Cibos is the creator of the award-winning three-volume graphic novel series Peach Fuzz about a prissy ferret named Peach, published internationally and syndicated in newspapers.

She is also the author of several instructional art books including Draw Furries (a recipient of the 2009 Annual Anthropomorphic Literature and Arts Award), and the follow-up book, Draw More Furries.

Lindsay has also worked on various comic titles including Sabrina the Teenage Witch, and Sonic the Hedgehog for Archie Comics, and Domo: the Manga for Tokyopop. Her most recent comic industry credit includes an illustrated cover and full color comic in Fraggle Rock: Tails and Tales, published by Archaia Entertainment/Jim Henson Company. (See Below)

Lindsay's newest project is an online graphic novel called The Last of the Polar Bears, about a mother polar bear and her two cubs. You can read it online at www.lastpolarbears.com.

You can see more of Lindsay’s art on The Art of Jared and Lindsay.

Return from Lindsay Cibos To How to Draw Home