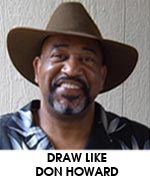 Being an artist is not just a career -- it's a way of life.

Being an artist is not just a career--it's a way of life. It requires dedication and hard work. If you're afraid of hard work, a career in art is not for you.

Don has always had a passion for art and this was evident even at an early age. While other kids were out playing with jacks and marbles, Don spent most of his time doodling. Imagine how excited he was when he discovered he could actually get paid for doing something that he enjoyed doing. Don fondly remembers the first time he got paid for his artistic talents. He was in the 6th grade and the father of one of his friends hired him to paint the slogan, "Giddy Up and Go", on his bass boat. For his hard day's work, Don was rewarded with a BBQ sandwich and a crisp $10 bill. That $10 bill changed his life.

Don didn't just sit around and wait for someone to notice how well he could draw. He knew he had to study hard and work even harder to develop his artistic talents. Once he completed high school, he enrolled in Hampton University in Virginia where he studied art. His hard work and perseverance paid off and after graduation from Hampton, he was offered a job at Walt Disney Studios. Don continued to grow as a professional artist at Disney working on animation projects such as Winnie the Pooh and Robin Hood. Working at Disney helped Don to develop good work habits to go along with his strong work ethic.

After Disney, Don's interest turned to the art of caricature. Don has always been fascinated with the art of caricature, and while some of his counterparts lend their talents to exaggeration of the subject's features, Don tries to capture the essence of each subject, feeling he does not need to distort the features to accomplish this. Don Howard's caricatures are mostly about celebrating the unique personalities and contributions of celebrities rather than poking fun at them, although the exaggeration of caricature lends itself well to humor. This respect for his subjects is one reason fans enjoy Don's caricatures so much. Don has spent years refining this technique and his caricatures stand apart because of the quality of the likeness and craftsmanship in his work.

Don Howard and his wife Dorothy currently own and operate a thriving online Celebrity Caricature business, Celebrity-Caricature-Art.com. Don has even sold commissioned caricature portraits to the families of the celebrities themselves.

Don consistently draws every day to keep his skills sharp. Drawing is a use-it-or-loose-it skill.

Back To How to Draw and Paint Smart Home