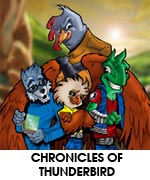 Chronicles of the Thunderbird

How to Draw Heroes and Villains

Philip Craig's
Chronicles of the Thunderbird

"Live right, have faith in God, and work hard!"

The Chronicles of Thunderbird was created by a fourth grader who liked reading, playing sports and drawing in class (after he got his work done of course). He grew up to become a local minister and Sunday School teacher at his home church Miracle House of Prayer located on the south side of Chicago, IL USA. Minister Philip Craig is also the program director of a local mentoring program that encourages young people to live good lives and work hard. He believes that if you live right, have faith in God, and work hard you will be successful.

Long ago the creatures of planet Amazon lived in by the word of God under the protection of the eagles and their Hero Forces. But there was an evil dragon among them who burned with discontent. Exiled from all of the nations for his envy and greed, he started a rebellion and proclaimed himself the Shadow King.

In his anger the dragon and his followers destroyed the eagles and burned their temples, darkening all memory of God, whom they worshiped. For five hundred years he held Amazon in his clutches virtually unchallenged, spreading malice and sorrow among the creatures of this once peaceful world. Now all that remain are a few scattered and discouraged heroes and a few copies of the bible that have escaped the Shadow Kingdoms destruction. Inspired by this Holy book, the unlikely duo of a nerdy dog and a fighting frog, under the leadership of` a big mouth turkey continue the struggle against the Shadow King. Unfortunately the three are grossly outmatched, and all seems lost when they cross paths with a young eagle named Jason.

The young warrior is unlike anyone they have ever met. He is able to punch through a brick wall with ease and he is so fast that he is capable of doing more in 10 seconds than most creatures do in an hour. However his greatest asset is his faith in God and his desire to learn more about the bible.

Jason is strong in faith and quick of claw but he has no idea why he is different and what it means to be the first eagle seen in five centuries. No one knows where he came from, but the heroes are glad he is here. In this world of chaos and intense battles it seems no one remembers God, but Jason and his new friends are about to start an adventure to save the world that will teach them more about themselves, God, and the love that this world has needed for a Long time.

The book that Jason and his friends use to help them through their adventures is a real book that is the cornerstone of the faith of millions of people all around the world. We believe that Jesus Christ is the son of the living God who came to teach us how to live a Godly lifestyle filled with love and peace. Once he shared his teachings he died on the cross for our sins. For God so loved the world that he gave his only begotten son that whosoever believeth in him shall not perish but have everlasting life (John 3:16). If you would like to learn more about the bible you can purchase one at your local bookstore.

Return from Philip Craig to How to Draw Home